Do People Find This Funny? 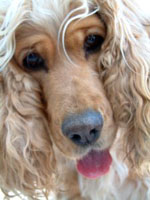 I know I’m open-minded to a fault and will laugh at most anything, no matter how tasteless. I find Joe Wong funny. But this little parody spoof thingie from The Spoof named McMuttleys to Open New Franchise in LA Korea-town is highly cringeworthy. Just read this line, and this is pretty much the rest of the article.

While this might offend the sensibilities of narrow minded dog owners who love and care for their pets as if they were children, the average Korean looks at a dog as a walking sandwich. (emphasis added)


Seriously? You went there?

I don’t know what bothers me more–a web site in 2010 making the Asian equivalent of a pickaninny with a watermelon joke, or the lame predictability of it. Or it’s a statement of how far with have to go with ignorance in my birth country.

Dog meat exists in Korea, but it’s fairly uncommon. And there’s a growing movement to do away with the practice. But historically and in modern times, China and southeast Asia eat much more dog than Korea, who unfortunately got slapped with the Koreans eat dog label around the time of the 1988 Olympics because it filled a great void in the western consciousness about what Koreans ate anyway.

We’ve been hoping that blogs like this would fill in that gap in people’s knowledge about what Korean cuisine is and isn’t. The Spoof didn’t get the memo.

13 thoughts on “Do People Find This Funny?”