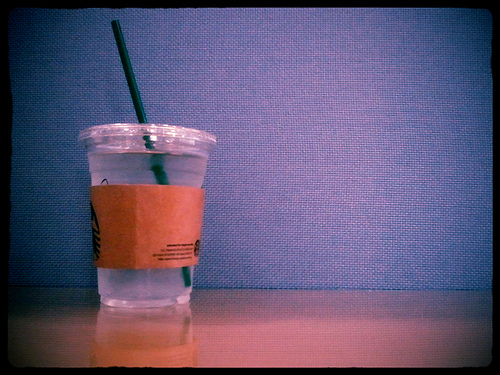 Just when I thought my coffee-related posts at ZenKimchi had run their course, the Joongang prints this article about a study by the Korea Consumer Agency that made me spit out my coffee:

That Starbucks Americano might come in a grande cup, but that doesn’t mean it’s full.

In its seventh Consumer Report this year, the Korea Consumer Agency said yesterday it found major coffee chains are selling smaller amounts of liquid than they set as their standard amount.

You might expect me to be sharing this article far and wide and doing an ‘I told you so’ dance, but unfortunately this article is more of an indictment of the Korea Consumer Agency than it is of the Korean coffee business.

As I tried to vent about this on Facebook, I realized there’s no way I could fit my comments into the space allowed, so I came directly over here to get this off my chest.

I’m going to break this down by suspect statements made in the article:

First of all, in the introduction:

The agency investigated nine coffee chains, including U.S. brands Starbucks and the Coffee Bean & Tea Leaf, and local brands A Twosome Place, Caffe Bene and Angel-in-us Coffee by evaluating 30 cups of Americanos and Caramel Macchiatos, the most popular beverages, from each store.

Yes, Starbucks and Coffee Bean and Tea Leaf are US brands, but it’s important to realize that as a foreign corporation, they are in partnership with a Korean firm. In the case of Starbucks, it’s Shinsegae. I only mention this because I’ve heard many complaints over the years about how much Starbucks over-charges because it’s an American company taking advantage of Koreans, etc, etc. Well, actually Starbucks is relatively cheap compared to other countries besides the US.

But that’s neither here nor there, because my main gripe is with the critical claim of the study:

On average, an Americano sold at the nine coffee chains was 60 grams short of the standard volumes set by each company.

Well whoopty-freakin’ doo. The article goes on to give a breakdown in the numbers from the various coffee chains but fails to mention a critical factor: You’re arguing over ~60 grams of water. Water that is added at the very end of the process, just before putting the straw in. If the total amount of “coffee” (and by “coffee” I mean the total amount of actual coffee + water) is too little, well, that probably means it actually tastes better, or, at least, stronger.

I guess it is possible that they might be skimping on the amount of espresso, but this would be hard to do without watching how individual baristas make the coffee. A standard Starbucks grande, last I checked, has 3 shots of espresso (which I believe is a full shot more than most brands as far as I know). The only way to skimp would be to deliberately leave out one of these shots. Possible I suppose, but much less likely than the possibility that the overworked university freshman making the drinks just rushed the very last stage (pouring the water) of a fairly mechanized process. Another possibility would be that they’re not using the proper amount of coffee beans to make the espresso to begin with, or that they are pulling shorter shots (effectively making a restretto), which isn’t even necessarily a bad thing. But even if you’re trying to gouge customers in this way, the only thing you’re really skimping on is water, and I have a hard time believing any of these chains are so hard up that they’re looking for ways to save a few fraction of a won by skimping customers out of 60 grams of water.

But you know what? None of that even matters because wherever that 60 grams of missing coffee went, it’s largely irrelevant because you can’t really tell where they’re skimping out on without watching them make the coffee. This brings us to perhaps the most infuriating point:

Amounts of caffeine contained in coffee beverages at the investigated chains were also inconsistent, providing consumers with different quality, the agency said.

Woah, hold on a minute there. We’re using caffeine as a gauge of quality now? This is just absurd, considering that low-quality robusta coffee beans have a much higher amount of caffeine than the substantially more tasty and coveted arabica beans. And they also taste horrible (partly BECAUSE of the overloaded caffeine content as a matter of fact).

So theoretically a coffee shop that is TRULY gouging customers by serving robusta beans rather than arabica, would be considered by the Korea Consumer Agency to have “high quality” coffee. In fact, most coffee connoiseurs would rank the beans with higher caffeine levels as lower quality because caffeine generally detracts from the taste. For coffee aficionados, coffee’s caffeine content is more of an annoyance than an asset. If you just need an energy drink and don’t care about the taste, just go buy an energy drink (it’ll probably be cheaper, although certainly higher in calories compared to an americano).

While you’re sitting on that bit of info, also consider this: caffeine level can vary greatly depending on many, many, many factors. Just a few of them:

The article goes on to name the coffee chain with the most highly caffeinated coffee (Cafe Pascucci), and the lowest (Tom N’ Toms), which is itself somewhat unfair because they might have different ways of making their americanos. In other words, they could very well be trying to differentiate themselves in the market by making a weaker espresso

So what does all this mean? Well, though I loath to be in the position of defending the Korean coffee shop industry, this “study” seems to have been conducted without consultation of a single expert on either coffee or investigative methods.  I can say so, having worked in a previous life as a government performance auditor for a midwestern American state when I was fresh out of grad school. Frankly, the data presented do not even come close to supporting the study’s claim:

“The coffee chains are not complying with their recipes, which has resulted in inconsistency in quality and quantity of coffee beverages,” the agency said.

In spite of their ‘study’ we still really don’t know if the baristas are complying with their recipes. In fact, there are a lot of untested assumptions in that statement. Frankly, most coffee shops’ recipes are unsatisfactory anyway so arguing over whether or not they are followed to a T is just wasting your breath. Besides this, there are natural variations between every coffee shop that cannot be avoided. Nor should they, actually, because finding a favorite coffee shop, and even a favorite barista that makes your favorite drink just the way you like it is all part of the enjoyment of coffee! The whole idea that coffee drinks should somehow be standardized across the board is anathema to the whole coffee industry.

What would be the reaction if some government agency came out and issued a damning report that the different kimchi brands all had different levels of gochugaru and fish sauce?   It might be useful to know if you’re allergic to fish sauce or can’t take too much spice, but it is far from a broad hit to the entire industry.

Towards the end of the article, a representative from one of the targeted coffee chains finally gets a word in:

“There is some misunderstanding, since we indicate the size of cups, not the amount of coffee,” said an official at Starbucks Korea.

“Amounts of beverages can be different, since they are handmade by baristas,” the official said.

If you’re really so concerned with the quality of your coffee, patronizing the major coffee chains, especially in Korea, is a losing battle anyway (for reasons I explained here, here, here and here). You’re much better off making it yourself at home. In fact, I think I’ll go calm myself down by doing that right now.