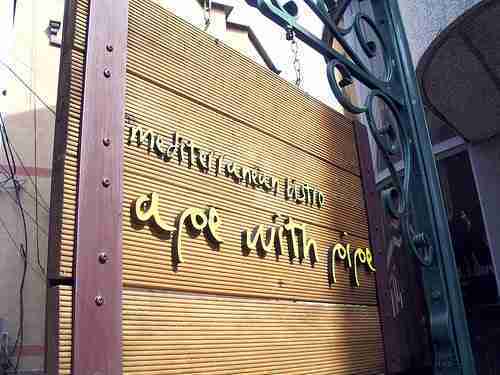 First off, let me start by saying this is NOT a negative review of Ape with Pipe. There are many good qualities about the hip restaurant overlooking Seoul that would make me return. Nonetheless, I had a similar dining experience there as Daniel from Seoul Eats.

I had heard about this restaurant repeatedly from the Itaewon blogerati and publications like it was the coolest thing to hit Korea. Miss Koco loved it. Expat Jane told me the mussels were great.

So, when a reporter from Canada wanted to meet me somewhere for non-Korean food, I suggested Ape with Pipe. The Marmot and his charming wife also joined. We were some of the first people in the restaurant for the dinner service. 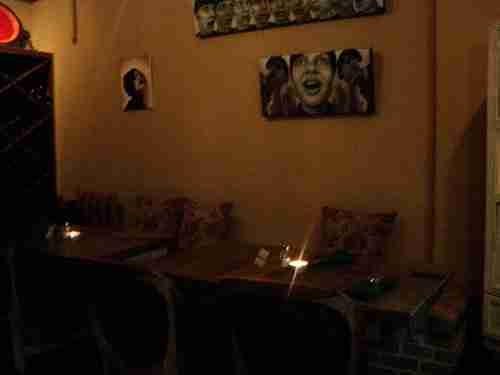 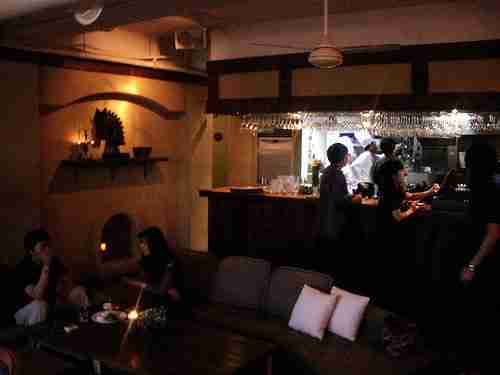 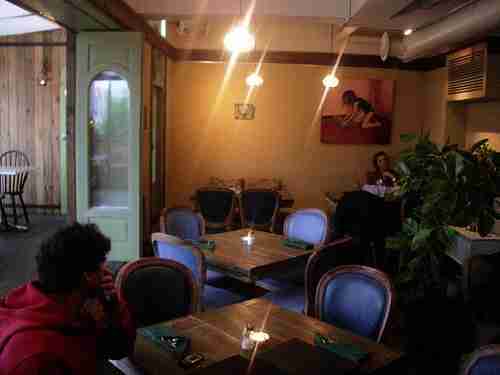 The decor at Ape is what attracts the wine party types in the foreigner community. It’s low-lit and subdued but full of interesting and sometimes unsettling artwork. It fits with the upper Itaewon pretentiousness that I see every now and then. Itaewonites can be worse than Manhattanites in the way that they look down on anything outside their little island world and latch onto anything that looks vaguely artistic and, well, “poser” their way through their lives.

The name “Ape with Pipe” is inspired by Pablo Picasso, claiming that it’s the type of name he’d use. And I think they were going for that Spanish surrealist vibe.

The reporter loved the place instantly. She said it was her type of hangout. The restaurant was still sparsely populated when we ordered a round of sangrias and some mussels in tomato sauce. Then folks started filing in.

It took a long time, but the sangrias finally showed up, and the mussels soon followed. To me, the sangrias tasted cloyingly sweet and lacked any punch. They were like Kool-Aid with added corn syrup. 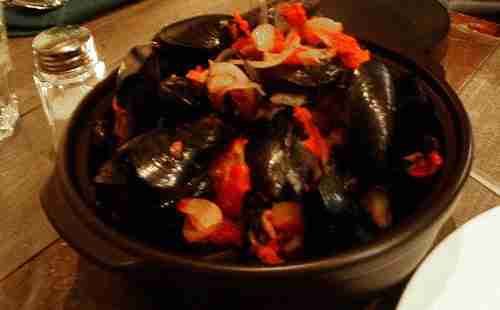 The mussels did live up to their reputation. They were delicious. They come in different flavors. These had tomatoes, onions and garlic–basically a chunky marinara sauce. They came with an outstanding crusty bread that I used to sop up the leftover sauce, which had the prized mussel juices in it. Our only complaint about the mussels was the price. They’re in the 12,000 won range, and I know I can get an equivalent bag of mussels for 2,000 won, and putting together the sauce would cost, at most, 2,000 won more. So this dish is selling at 300% of cost.

Well, that’s how they’re making their money, I’m sure. And they ARE good.

We ordered some more items, a spaghetti in tomato sauce, paella, and an onion and mushroom tart. The restaurant started to get packed. We eventually got the mushroom tart and paella. 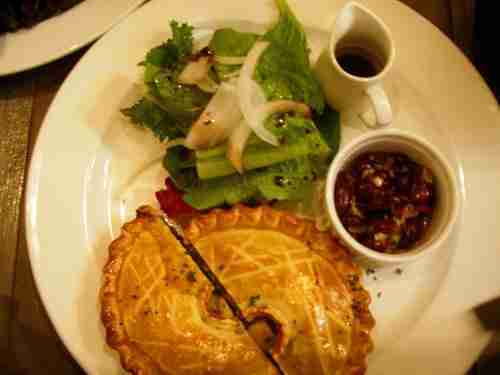 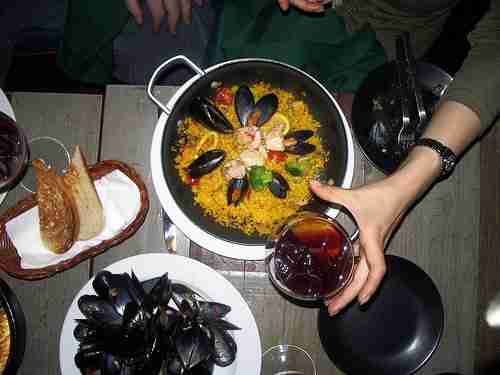 They were okay. Not stellar. The crust of the tart, even though I assume it was made in-house, tasted dry, like it was previously frozen. The filling was mushy and bland. A few more herbs and some salt would have helped. And maybe some more freshness in ingredients. The comment on the paella was, well, “Costco tastes better.”

It wasn’t bad. It was just that Costco’s paella tasted better.

Now, I’ve worked in the restaurant industry a few years, back of house and front of house. I observed and noted that the service is Ape with Pipe’s biggest glaring weakness. The restaurant would be incomparably stellar if they fixed the service alone.

Here’s the problem. The staff looks like they’re mostly Korean college students. That being said, they take a Korean approach to western restaurant service, meaning they stand around doing nothing until someone higher up tells them to do something. They take no initiative beyond making sure plates are swept off of tables while diners are still eating their last bites. They also do that infuriating practice of–well, here’s an example.

Okay, our compatriot was too hungry to complain. She changed to spaghetti with an olive oil sauce. Simple enough.

Thirty minutes later, we’re trying to snag a waiter or waitress. We tell them that we have been waiting over an hour on a simple pasta order. They smile and apologize. We ask them to go to the open kitchen and see what’s going on. They agree to do so.

They then promptly go and stand in front of the kitchen, looking at the dining room, waiting for the boss to tell them what to do next. They didn’t even ask the kitchen. I watched the whole thing.

We were able to finally grab onto the owner. We told him about the whole fiasco. He seemed baffled as to why anyone said they were out of tomato sauce. We were too, since we could see a pot of it simmering on the stove in the open kitchen.

Honestly, this is not an isolated Ape with Pipe problem. This is a problem with Korean restaurant service in general. There is not a tradition of restaurant service, or the tradition has been lost. A typical Korean restaurant experience is that you ring a bell (what I call the “ding dong”) when you want something. Korean restaurants’ menus are so specialized that the servers don’t need to write anything down. There are only a few things on the menu, and that’s just main dishes. The side dishes are the same for each table automatically. So they just remember what meat you ordered and then come out and slam that side dishes on your table and throw some meat on the grill. If you need anything else you just buzz them.

It’s really a pretty good system, but it works best in Korean restaurants, where there are limited menus and one-size-fits-all side dishes.

Then we take that into a fine dining or even just a different type of restaurant environment without “ding dongs” and with more than three items on the menus. When I went to Gaon in Apgujeong, supposedly one of the finest dining Korean restaurants out there, the staff just seemed uncomfortable. They relied too much on pretension (especially with the wine list) and not on making the customer feel comfortable. In fact, they were nudging us out the door when ten o’clock hit while we were still in the middle of our main courses. That’s happened to me a couple of times. They politely come by to tell you they are closing. Basically, “Stop eating. We are going home now.”

Yet there is also this issue of hierarchy and miscommunication. Servers tend to think of their supervisors as the only people to please and not their customers. I have stories of the Outback we went to my first year in Korea. Every time we went there, every single order was screwed up. And it’s hard to screw up orders in places like that, with the well worked-out computer systems and all. I worked for a while at Chili’s and, say what you will about the food, their service system is a work of art. Those chain restaurants have finely tuned efficient systems set up so that a mentally impaired monkey would have a hard time blundering.

Yet we figured out that the servers at Outback, college students, mind you, were uncomfortable with paper. They didn’t like writing things down, and when they did, they rarely did it orderly. I looked at the paper while they were writing, and they just wrote stuff in random places. No system like we were taught in every restaurant I’ve waited tables at.

So we had food that wasn’t cooked to order–every single time. A loaded jacket potato order came out as a sweet potato with butter. That one was a strange one. I saw Brant order the jacket potato and list everything he wanted on the potato. The waiter wrote each bit down–in random places. Nonetheless, how can anyone confuse a jacket potato with sour cream, onions, cheese and bacon with a buttered sweet potato?

There is a possibility that the server didn’t get confused. Stories have swirled around how the western chain restaurants in Korea have perverse hazing and sexual harassment problems, such as supervisors giving titty twisters to female waitresses who break glasses.

I’m not alone in this speculation. Last night Eun Jeong and I decided to try out a new seafood restaurant in the neighborhood. They served only two dishes, MakHui 막회 and MulHui 물회. Basically, these were chilled raw sashimi soups. I had never tried them before, and even Eun Jeong was not familiar with the difference between the two.

This was a small family run restaurant. The son, who looked to be in his late twenties, came to take our order. Eun Jeong asked what the difference was between MakHui and MulHui. He said that MulHui was purely squid and that MakHui was a mixture of different fish. Eun Jeong loves squid, so she ordered the MulHui.

The son came back out with a bowl for us to share. Beautiful chilled red soup with ice shavings and crunchy vegetables. We ladled some out into our bowls, and we both noticed something.

There was mixed fish in there and very little squid. They had given us MakHui.

Now, there’s one thing you don’t do to Eun Jeong–make her look stupid. She was ready to cause a scene. She called the son over. She said in Korean, “You said that the MulHui was just squid. This isn’t squid. Do you think I’m too stupid to notice that?”

The son apologized, visibly sweating, and tried to explain feebly what was going on and saying he was overworked. Then the mother came out. The mother said that squid was too expensive these days.

“Well, if that is so, why didn’t you tell us that before we ordered the squid MulHui? When someone orders squid, you don’t just come out with something else because you feel like it.”

In the end, it looked like a miscommunication between the mother and son. The son didn’t see where the customer fit into the hierarchy. He went back to tell Mom to make the squid MulHui. Mother told him that she couldn’t make one because they were short on squid. Son didn’t want to cross his mother, his boss, and he felt that the best solution was to not tell the customer. The customer isn’t as important as the boss. Ignore the problem and maybe it’ll go away.

Well, Eun Jeong is a problem that won’t go away. Trust me on that one.

We ended up with the proper squid version in the end. It was very good, actually. The son promised to take the beer off our tab to apologize. Of course, the mother, who handled the bill ignored what her son did and charged us for the beer. Rather than make another scene, we just paid and left.

That is customer service in Korea.

I know that’s not the usual experience, but I have experienced it too frequently here, compared to other places. Yes, in France, they can be outright rude and impatient and make you feel like the most uneducated plebe. But if you have a problem, they don’t try to ignore it and pretend it will go away.

This brings us back to Ape with Pipe. It has the potential to be something truly great. It already has the stamp of approval from the Itaewon socialite crowd. Yet I’m afraid they rest on and rely too much on fake pretentiousness while letting the service and food suffer.

I almost didn’t publish this. In fact, it’s been sitting on the computer since May. But I’ve gone ahead and finished it because, talking to people, my experience was not isolated there.