Continuing from the previous rant.

One of the many egregious boners they pull is using ActiveX for their services. ActiveX was brought about by Microsoft in 1996 and has since been abandoned by almost everyone, including Microsoft, because it’s an insecure, lousy internet solution. But many Korean websites still rely on it. I think it’s because there are many ActiveX plug-ins that are readily available, and the programmers are either too lazy, uncreative, or incompetent to program their own solutions. So they just take what’s available and redress it with their company’s logo.

But this is how Naver is even more insidious. I was cleaning out some programs on my computer this morning. I saw that Naver had an ActiveX control in my program list.

You can see it’s from NHN Corp., which is Naver. But look at the gibberish. This is another indicator of lazy programming. They put their text in a very specific encoding that I’m sure only their computers are set up for. They don’t test this on other computers to see if it works outside the Naver campus bubble. My laptop is a completely Korean computer with a legal Korean copy of Windows 7 running. So there’s no reason why Korean would pop up as gibberish on my screen.

So I double-click to remove this abomination. 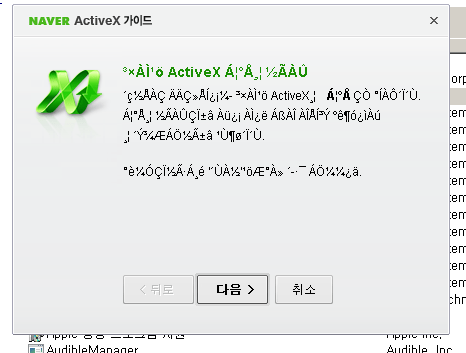 More gibberish! But the pre-programmed uninstall wizard at least has the buttons in Korean. I clicked 도음 (Daum), which means “Next.” 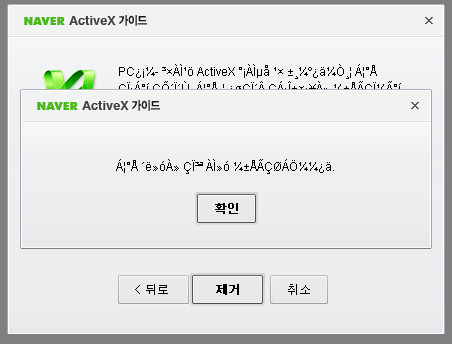 Even more gibberish! And it looks like an error message. The button just means “Enter.” It brings me back to the previous window. So this means that

I can’t even remove this stinking program!!

How incompetent/evil do you have to be to have a program that can’t even uninstall?

To sum up, Naver sucks because they